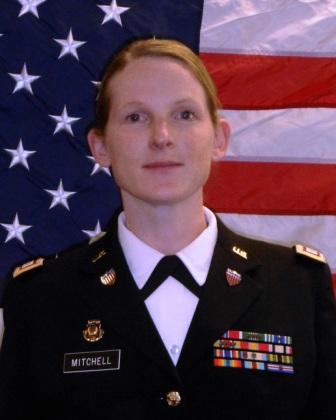 MAJ Tracy A Mitchell is a 1994 graduate of Jefferson High School in Boulder, Montana.  In 2000, she graduated with a Bachelor of Arts in Accounting from Carroll College in Helena, MT. She enlisted in the United States Army Reserves in 1994 and served in various positions up to platoon sergeant. She received a direct commission into the Adjutant General Corps in 2002. She has served with the 159th Corps Support Group and the 747th Adjutant General Company (Postal) and served as a detachment commander while in Iraq. She currently serves as the Battalion S-4 Logistics Officer for the 379th Engineer Battalion. Her awards include the Bronze Star Medal, Army Commendation Medal, Army Achievement Medal, Iraq Campaign Medal and the NCO Professional Development Ribbon.  MAJ Mitchell is married to Timothy F. Mitchell of Missoula, MT.  They have two children: Teagan and Fergus.