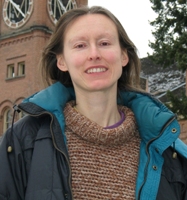 Klára Briknarová came to the University of Montana in November 2005. Klára received her undergraduate education from School of Mathematics and Physics at Charles University in Prague, Czech Republic. She carried out graduate studies in the laboratory of Professor Miguel Llinás at Carnegie Mellon University, and earned her PhD. in Biophysics/Chemistry in 1999. She then worked as a postdoctoral fellow in the laboratory of Professor Kathryn R. Ely at the Burnham Institute. Klára is a biochemist and structural biologist.

Molecular mechanism of transcriptional regulation by EHMT and PRDM proteins

A question of particular interest is how cell identity is established and maintained at the molecular level. Brain, heart or fat cells are remarkably different yet they all start with the same genes. How do different cells and tissues remember what they are, and what keeps them from going astray? Gaining insight into how cell-type specific transcription programs are determined remains a major challenge for life sciences today. Transcriptional regulation and in particular epigenetics (heritable changes in gene expression that occur without changes in DNA sequence) have become an area of very intensive research that has large implications for stem cell biology, development, and various human diseases including cancer. One large group of transcriptional regulators that are involved in establishment of cell-type specific transcription programs are proteins with a SET domain or the closely related PR domain. We investigate the structure and function of several of these proteins using biochemical methods, NMR spectroscopy and X-ray crystallography.

Fibronectin is a large multidomain extracellular matrix glycoprotein that is essential for vertebrate development. It also serves an important function in tissue repair and plays a role in other physiological and pathological processes including cancer. Fibronectin is secreted as a soluble dimer and is assembled into fibrils on the surface of cells in a process that requires cell-generated tension. Despite the essential function of fibronectin and its applications in biomaterial engineering and medicine, the molecular basis of its conversion to fibrils is poorly understood, and the exact arrangement of fibronectin molecules within fibrils is not known. We study the structure of fibronectin in solution and its organization in fibrils using a range of techniques including fluorescence microscopy, crosslinking, NMR spectroscopy, X-ray crystallography, and cryo-electron microscopy. 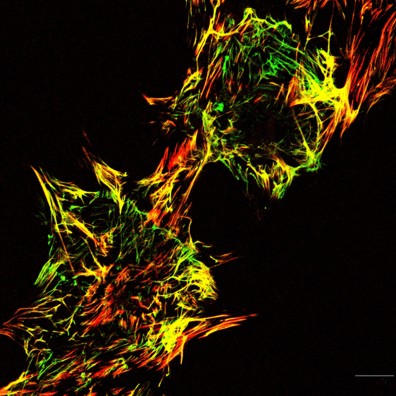