College of Humanities and Sciences / Communication Studies
You are here: 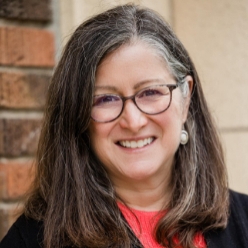 Sara Hayden’s research is in the area of rhetorical criticism and theory. In her work, she integrates interests in the social construction of gender, feminist theory, and feminist movements.

Sara has published and presented essays exploring both contemporary and historical rhetoric surrounding women's health, reproduction, sexuality education, maternity, and the abortion debate in the United States. Her current work focuses on the rhetorical construction of maternity.

2011 Outstanding Edited Book Award, awarded by the Organization for the Study of Communication, Language, and Gender, for Hayden, S., and O’Brien Hallstein, D. L.  (Eds.) (2010) Contemplating Maternity in an Era of Choice: Explorations into Discourses of Reproduction.

Faculty Prize for Outstanding Research or Creative Activities in the Study of Women or Gender awarded by the Women’s Studies Program, The University of Montana, 2010, 2004, 2002, 2000, 1998

B. Aubrey Fisher Outstanding Journal Article Award, awarded by the Western States Communication Association, February, 1998 for Re-claiming bodies of knowledge: An exploration of the relationship between feminist theorizing and feminine style in the rhetoric of the Boston Women's Health Book Collective.  Western Journal of Communication, 61, 127-163.

The William Reynolds Award for Excellence in Teaching Across the Curriculum, granted by the College of Humanities & Sciences, University of Montana, Spring 2018

COMM 448-The Rhetorical Constructon of Woman

COMM 595-Seminar in Gender and Communication