College of Humanities and Sciences /Flight Laboratory
You are here: 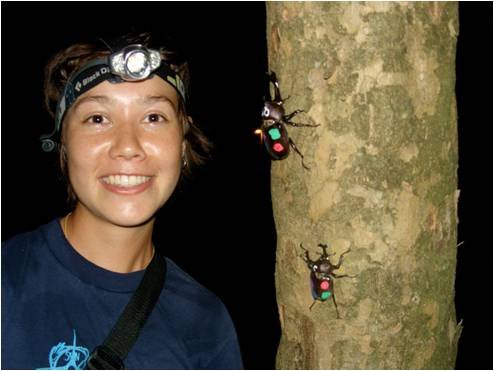 One of the fundamental, and most exciting questions for evolutionary biologists is explaining the incredible amount of morphological variation that is found among organisms. My dissertation focuses on the evolution and diversification of animal weapons, and specifically, how the functional consequences of different horn types may have shaped the evolution of weapons among rhinoceros beetle species. I explore the hypothesis that the different sizes, shapes, and architectures of horns in rhinoceros beetles may reflect the functional and mechanical constraints on different weapon designs. That is, selection to minimize the functional costs of carrying and producing horns may explain why beetles living in different habitats have different horn morphologies; and selection to maximize the function of horns, or how well horns perform during combat, may help explain why beetles that have different fighting tactics, or that fight on different substrates have different types of horns. I hope to explore how mechanical and functional constraints have influenced the evolution of weapon morphology among rhinoceros beetles in order to better understand the diversity of some of Nature’s most elaborate body forms.