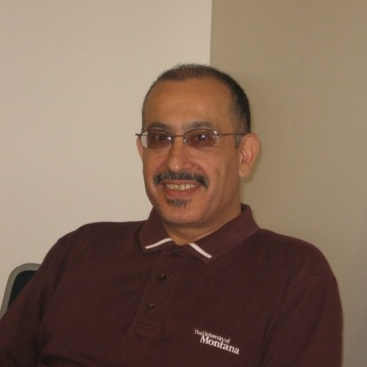 Professor Samir Bitar is Lecturer of Arabic language and cultures at The University of Montana.  A native Palestinian, Bitar eventually came to Montana at age sixteen as a freshman in college. He earned his first degree in Civil/Structural Engineering in 1980 which took him to Arabia where he worked for eight years and during that time served as a guest lecturer at King Faisal and King Abdul-Aziz Universities.  He has been teaching Arabic at The University of Montana since 1999, offering instruction in all levels from Elementary Modern Standard Arabic, Conversational Arabic (Levantine Dialect) and Introduction to Arabic Poetry and Literature.  In May of 2009 he received his masters from The University of Montana in linguistics, teaching methods and cultural geography.

Most recently, Bitar was nominated for the Faculty Diversity Award for his work at The University of Montana. Bitar and his colleagues from the Central and Southwest Asian Studies Center secured a grant through the National Foreign Language Center (University of Maryland) to conduct an Arabic Summer Institute to local High Schools in the summer of 2008. The Montana Arabic Summer Institute, better known as MASI will run for its fourth consecutive summer in 2011. They also teamed with MCPS to secure grant to introduce Arabic Language and Culture to Missoula County Public schools starting in 2011. In addition, he has acted as a liaison, translator and interpreter for the Office of International Programs for Specialized Training of Egyptian Educators.  Actively involved in methodology, he has attended and presented in numerous seminars on teaching the Arabic language throughout the country.  He has been a keynote speaker at the Model Arab League Annual Conference, the Golden Key Honors Society and The Annual Foreign Languages and Literature Days, He also formed “Mount of Olives Arabic Language and Culture Club” in 2005, a student group focused on learning about Arabic Language and Culture.

Bitar was awarded a Certificate of Recognition from the Vice President of Student Affairs for his dedication to students at the University of Montana. The Arabic Program here on campus, received the Andrew Heiskell Award for “Internationalizing the Campus” as a direct result of his efforts. For the past year Bitar has travelled around the state to train the Montana National Guard in essential Arabic language and culture prior to their deployment.

Bitar also serves as the Academic advisor/Mentor for the Model Arab League program at The University of Montana, and he is a public speaker on issues relating to the Palestinian-Israeli conflict, the Arab-Israeli conflict, Arab Cultures, and Islamic civilization

Second Language Acquisition; Identity and Language; Arab/Islamic History and Culture; Governments/Politics of the World with Emphasis on the Middle East