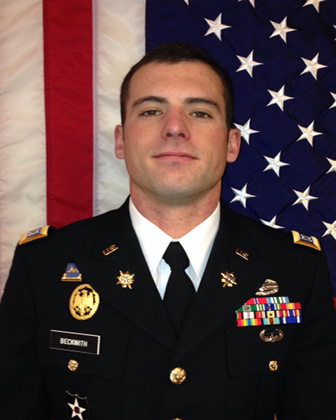 CPT Patrick A. Beckwith is a 2003 graduate of Skyline High School in Sammamish, Washington. He is a class of 2008 graduate of the United States Military Academy at West Point, New York where he received his commission as a Second Lieutenant in the United States Army. CPT Beckwith holds a Bachelor’s Degree in Law and Legal Studies with a concentration in Environmental Law and a minor in Environmental Engineering.  He commissioned as an Army Intelligence Officer, assigned to the 201st Battlefield Surveillance Brigade at Joint Base Lewis-McChord. He deployed to Mosul, Iraq in 2009-2010 as a Multifunction Team Leader and transitioned to serve as a Human Intelligence Company Executive Officer. CPT Beckwith deployed again in 2011 with 2nd Battalion 75th Ranger Regiment to Kandahar, Afghanistan where he served as a Joint Intelligence Officer. Returning to Joint Base Lewis-McChord, he was assigned to 2-3 Infantry Regiment, 3rd Stryker Brigade as the Battalion Intelligence Officer where he deployed again in 2012 to Ghazni and Paktika Province, Afghanistan. CPT Beckwith is married to Lauren, a successful high school biology teacher and passionate horse owner also from the state of Washington and a graduate of the University of Washington with a Master’s in Education and Bachelor’s in Physiology. He and his wife enjoy the great outdoors: hiking, fishing, hunting, and skiing to name a few.