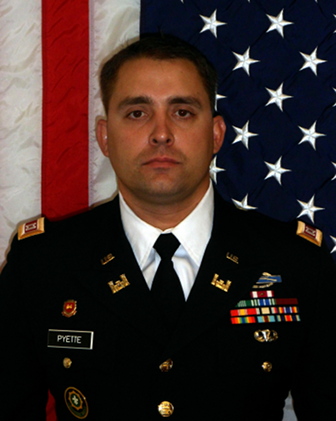 CPT Pyette was born in Montana on December 26th 1979.  He graduated from the University of Montana with a B.S. in Political Science.  His military education includes Basic Airborne School, Infantry Officer Basic Course and the Engineer Captains Career Course. CPT Pyette’s first assignment was with 1st Squadron 2nd Stryker Cavalry Regiment at Vilseck Germany.  He served in HHC as an Assistant Operations Officer.  He was then assigned to Comanche Company where he deployed to Iraq as a Rifle Platoon Leader.  After his time in Germany he was assigned to 191 IN at Ft. Lewis, WA where he served as an AC/RC Team Chief and BN Assistant Operations Officer. CPT Pyette’s awards and decorations include the Meritorious Service Medal, the Army Commendation Medal, the Army Achievement Medal with Oak Leaf Cluster, the Navy Good Conduct Medal, the National Defense Service Medal, the Iraqi Campaign Medal, the Global War on Terrorism Service Medal, the Navy Marine Corp Oversees Service Ribbon, the Army Service Ribbon, the Parachutist Badge, the Combat Infantryman Badge and the Expert Infantryman Badge. CPT Pyette is married to Jessica Pyette, and they have a 9 year old son Tristan, and a 6 year old daughter Taylor.