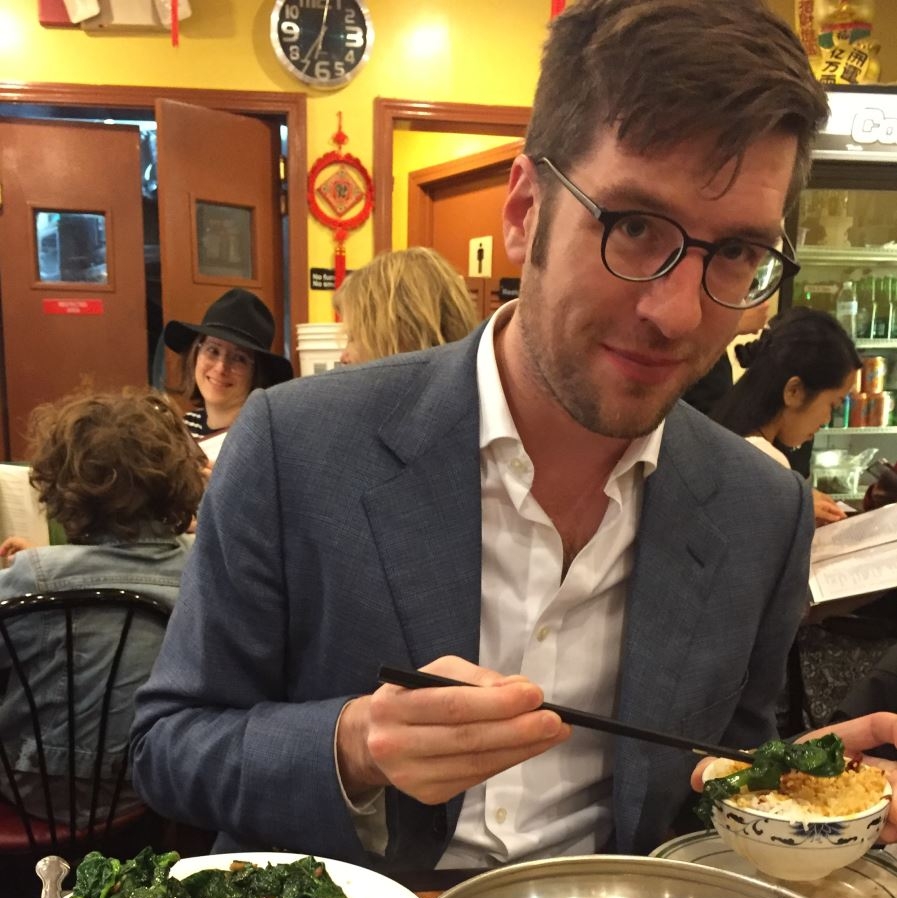 Eric Schluessel teaches courses in the history and politics of China. His research focuses on the social history of Xinjiang, a Muslim-majority region in Chinese Central Asia, during the Qing dynasty (1636/44-1911) and twentieth century.

Professor Schluessel is interested in advising students in frontier history, comparative empire and colonialism, and the histories of China and Central Asia. Upcoming course offerings will include survey histories of East Asia, imperial China, and modern China, as well as specialized courses on rebellions and revolutions and the Chinese intellectual and legal traditions.

(as 許臨君) “从城隍到戍卒：定湘王在新疆 [From God-of-the-Wall to Garrison Soldier: The Dingxiang Wang Cult in Xinjiang],” 历史人类学学刊 Journal of History and Anthropology, special issue 重探「帝国」与「地方社会」 ：华南研究与新清史的对话 [Reexamining “Empire” and “Local Society”: A Dialogue Between Historical Anthropology and the New Qing History] (October 2017), 169–186.

“A Key to the Pious Economy of Turn-of-the-Century Kashgaria” in Wiebke Beyer and Zhenzhen Lu, eds., Manuscript of the Month 2017.05, online at https://www.manuscript-cultures.uni-hamburg.de/mom/2017_05_mom_e.html.

“The Law and the ‘Law’: Two Kinds of Legal Space in Late-Qing China” in Extrême-Orient Extrême-Occident 40 (November 2016).

“Thinking Beyond Harmony: the ‘Nation’ and Language in Uyghur Social Thought.” In Ildikó Bellér-Hann and Trine Brox, eds., On the Fringes of the Harmonious Society: Tibetans and Uyghurs in Socialist China. Copenhagen: Nordic Institute of Asian Studies Press, 2013, 318-346.

“Language and the State in Late-Qing Xinjiang.” In Birgit Schlyter and Mirja Juntunen, eds., Historiography and Nation-Building Among Turkic Populations. Istanbul: Swedish Research Institute in Istanbul, 2014.

HSTR 392 IS: Nationalism: Theories and Cases

My book is a social history of history of colonialism in Xinjiang during the Muslim-majority region’s incorporation into the Chinese state in the late nineteenth and early twentieth centuries. A shared Neo-Confucian ideology of socio-moral transformation motivated the Han Chinese leaders of the region’s government to enact a civilizing project aimed at turning Muslims into Confucians. I argue that the institutions of this civilizing project reshaped everyday social and economic relations between members of different linguistic and religious groups, as well as historical consciousness, in ways that engendered increasingly sharply-bounded ethnic identities.

This project began with a simple but largely unexplored question: what did Turkic-speaking Muslims (more or less today’s Uyghurs) think of being ruled by Chinese? In order to explore this question, I read manuscript sources in the Chaghatay language, newly-available judicial archives in Chaghatay and Classical Chinese, and accounts by foreign observers in English, Russian, and Swedish.

Law Beyond Law: Imperial Geographies of Exception and Morality

In the mid-nineteenth century, the Qing empire (1636/44-1911) was transformed from within. Provincial activists carved out a new zone of sovereignty, not for their Manchu rulers, but for Han Chinese elites who saw China as their own cultural inheritance. Imperial law was suspended. In its place, these activists promoted "law beyond law" — the system of rites and social relations that they considered more fundamental to a distinctly Chinese cosmic and political order.

I am exploring the shifting boundaries of this peripatetic zone of exception by analyzing stacks of official documents on executions and the suspension of statutory judicial procedure in the Qing. The theoretical apparatus draws on both critical geography and the anthropology of law. The idea is, in large part, to point to the relationship between law and law-like systems in imperial expansion and territorialization. In the longer term, I will bring these observations to bear on other non-Western and later European imperial formations.

The TaÌ„riÌ„kh-i HÌ£amiÌ„diÌ„ is a chronicle of nineteenth-century Xinjiang written in the Chaghatay language — and so much more. MullaÌ„ MuÌ„sa SayraÌ„miÌ„'s 1908 masterpiece is also a work of Islamic sacred history and a commentary on political theory in an age of Chinese domination of Muslim peoples at the edge of the Islamic world. This work is a critical source for non-Chinese, native perspectives on Qing empire, and yet no translation or even scholarly edition of it exists.

The TaÌ„riÌ„kh-i HÌ£amiÌ„diÌ„ Editing Group first convened on a monthly basis in 2015-2016 with the goal of remedying that lack. We established basic standards for foliation of the multiple available manuscripts, annotation, and translation. An expanded group of international scholars came to Missoula, MT in late May 2017 for a Henry Luce Foundation/ACLS Program in China Studies Collaborative Reading Workshop. I foliated and annotated fully one-quarter of the dense Chaghatay text, and we spent a few days at the UM campus plumbing its mysteries and working on a translation for future scholars and students to use.

The TaÌ„riÌ„kh-i HÌ£amiÌ„diÌ„ project continues with plans for a 2019 workshop! In the meantime, I am completing the first English-language textbook for Chaghatay.